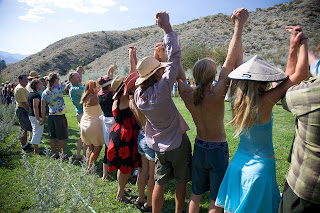 In a surprising move, the Seattle Stranger last week gave 'Back to the Garden" an astonishingly good review.  No we haven't lost confidence in our film.  It's just that the Stranger almost never gives a decent review to ANY worthwhile film....especially local films like ours. So we were almost stunned by the positive attention given by our usually snarky alternative newspaper. Who knew they had a soft spot...well, you be the judge.

There are four films in Made in Seattle: Homegrown Documentaries (a two-day series at the Rainier Valley Cultural Center), and each deals with a significant social/political/cultural issue or project. Though all of the films are worth watching and talking about, one, Back to the Garden, Flower Power Comes Full Circle, fascinated me more than the others. The documentary, which is by Kevin Tomlinson, is about a community of hippies filmed in rural Washington in 1988—the last year of the 20th century (that century ran between the Russian Revolution in 1917 and the fall of the Berlin Wall in 1989). To fully understand why this is interesting, one needs to watch another documentary, Milestones, which is four times longer than Back to the Garden and was filmed by Robert Kramer and John Douglas and completed in 1975.
In Milestones, we see the end of the hippie revolution. The dreamers of peace, love, and nature leave the woods and return to capitalist realism—finding a job, paying rent, and going into debt. The film is filled with sorrow. The hippies are totally defeated. They changed nothing at all. Indeed, society is even more conservative than when they left it. Social democracy is dead. The 30-year agreement between unions and capital is reaching its end. Ronald Reagan is around the corner. In Back to the Garden, however, we see that some hippies did not give up the fight, did not surrender their dreams, but continued dancing to African drums, worshipping Mother Earth, and growing their own food.
But here is where the documentary becomes very interesting: In 1988, the rural hippies looked just plain crazy (the director even says as much), talking endlessly about nature this, sustainability that, and the like. But today, they sound totally sane and even urban. The director reinterviewed some of the hippies in 2008, and it's clear that they now live in a world that's realizing more and more of their dreams—using cloth diapers, recycling waste, turning to solar energy, breaking with Judeo-Christian morality, and seeing humans as just one life form among many. The hippies have moved from the cultural fringe to the center of rational discourse. We need more arts, more communal cooperation in the care of our children, more free time to enjoy life, more trees, more food grown without chemicals, more sources of renewable energy—the list goes on and on. We are all hippies now.

Posted by KEVIN TOMLINSON at 1:20 AM